How to Soothe Painful Mouth Burns 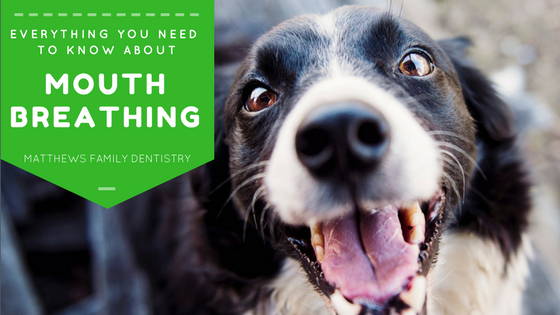 Most people do not think about how or how often they are breathing. A person will typically breathe in and out through their nose, allowing the nasal passages to warm and moisten the air they take in.

However, some people breathe in and out mostly through their mouth instead. This is known as mouth breathing.

Occasional mouth breathing due to a temporary illness, such as a cold, is not a cause for concern. Chronic mouth breathing, however, can signal that a person needs additional medical intervention or some re-training on how to breathe more easily through their nose.

Contents of this article:

Several health conditions and risk factors can lead to mouth breathing. Examples include the following:

Another possible cause is a tongue tie, where the tongue is tethered in the mouth more than usual. The tongue tie may cause a person to have difficulty moving the tongue.

According to one study, mouth breathing can worsen exercise-induced asthma. This happens because the breath does not get as warm or moist, both of which help to reduce airway irritation.

Adults who have a history of sleep apnea may find their symptoms worsened by mouth breathing.

Chronic mouth breathing can cause a person with sleep apnea to have their jaw and mouth in a position that does not support breathing. As a result, they may have difficulty in breathing and getting a good night’s sleep.

Those with sleep apnea who engage in mouth breathing at night may require a continuous positive airway pressure (CPAP) mask that is larger than a nasal CPAP option.

Often, mouth breathing will cause a person to have a slightly open-mouthed appearance.

People may be able to hear breathing sounds coming directly from their mouths. Those who mouth breathe are often “noisy” eaters because they are so used to breathing out of their mouths, which is more difficult when eating.

Unfortunately, those who engage in mouth breathing are more likely to have certain less-pleasant symptoms, as well.

One possible symptom is bad breath. Mouth breathing dries out the mouth and teeth, and a dry mouth is associated with a greater risk of bad breath.

According to one study, an estimated 50.9 percent of children identified as mouth breathing had a strong mouth odor. Only 23.6 percent of the children who had a mouth-breathing pattern had no bad breath at all.

Other symptoms that people who mouth breathe might have include the following:

Several research studies have found that children who mouth breathe also experience changes in the development of their jaws. They are more likely to have longer faces and jaws that are not positioned evenly.

A child who has experienced mouth breathing for some time will often have an overbite. The technical term for this jaw position is retrognathic.

When mouth breathing is a temporary condition, it is often due to a cold or other illness that has blocked the nasal passages. A person will usually have a stuffy or a runny nose alongside the mouth breathing.

Chronic mouth breathing is associated with several health complications. While a person will not necessarily experience all of these complications, they can have some.

Complications caused by mouth breathing can include:

Most people can seek treatment before their symptoms worsen and they experience any long-term complications.

When to see a doctor

While mouth breathing is rarely an emergency, a person should see their doctor if they spot any of the symptoms of mouth breathing, especially a dry mouth upon awakening or chronic bad breath.

Parents who notice that their child snores or usually breathes through their mouth instead of their nose should make an appointment with a pediatrician.

A doctor will ask questions to obtain a full medical history if they suspect mouth breathing is a problem for someone. They will ask when the person first noticed their symptoms, what makes their symptoms worse, and if anything makes them better.

A doctor will often inspect a person’s mouth, throat, and nose to identify any areas of swelling or abnormalities and observe their breathing pattern.

They may also order imaging studies to examine the nasal passages and perform lung function tests to see if the lungs are impacted by asthma or other conditions.

If a doctor suspects a person may have sleep apnea, they may order a sleep study. This involves the individual going to a sleep center where monitoring equipment can identify if, when, and how often a person stops breathing while they are sleeping.

Both children and adults can have sleep apnea.

How is mouth breathing treated?

Treatment of mouth breathing depends upon its underlying cause.

For example, if a person has enlarged tonsils and adenoids, a doctor may refer them to an ear, nose, and throat specialist called an otorhinolaryngologist.

This type of specialist doctor can perform a procedure to remove the tonsils and adenoids to help with breathing.

If a person has a problem with the shape of their nasal passages, they may need surgery. A doctor may need to widen a sinus passage or perform other procedures so that the person can physically breathe out of their nose.

Taking medication such as anti-inflammatory nasal sprays, antihistamines, and decongestants for a short time period may also help.

Additionally, doctors and physical therapists may be able to teach a person techniques that can retrain their breathing to help them focus on breathing through their nose instead of their mouth.

Just as a person performs exercises to strengthen their arm muscles, they can also do exercises that retrain the muscles of the mouth and tongue to help with nasal breathing.

Therapists may practice several different methods. Some of the more common ones include the Buteyko Method, the Papworth Method, and pranayama yoga.

These exercises regimens should only be performed under the care and guidance of a qualified therapist as they might involve holding one’s breath and controlling the breathing.

Mouth breathing is a highly treatable condition that a person should not hesitate to seek treatment for.

The earlier that a person seeks treatment, the less likely they are to experience any chronic and long-term complications of mouth breathing, including the repositioning of the jaw.